A church warden and organist from Abergele has been awarded a medal in the Queen’s New Years’ Honours. 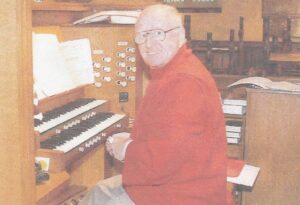 Len Ellis from St Michael’s Church in the town, will receive the British Empire Medal (BEM) for services to young people and the community, in particular for his work with the Urdd movement and Eisteddfod’s.

Mr Ellis has been an active member of the Abergele community all his life, working as a motor vehicle engineering tutor at Coleg Llandrillo at the same time as being a retained fire-fighter (for four years, he was officer in charge).  For 17 years, Len along with his wife Eirlys, ran the Abergele branch of the Urdd Movement organising fundraising events and youth activities.  He was Chief Steward at the National Eisteddfod at Abergele in 1995 and was Safety Officer for many years at the Urdd Eisteddfod.

Mr Ellis plays the accordion, accompanying folk dancing groups in local schools and dancing teams and has been a regular organist at St Michael’s Church for the last 30 years.  He is also an accomplish harpist and a member of the Gorsedd of Bards with the bardic name of Telynor y Rhos.  Recently he successfully applied for a £72,000 grant from the Heritage Lottery Fund to carry out essential repairs to the church’s tower and to reorder the building’s West End.

Responding to the honour, Len Ellis said: “I am delighted and humbled to have been nominated for this award. When I was first contacted by email and then by telephone, I assumed it was a scam.  It took a lot of convincing by the Cabinet Office for me to believe them.

“I’m particularly pleased there’s an E in the middle of the initials BEM, which I take to mean, Eirlys, my wife. She and I have done so much together, and this award recognises her work too. We both received The John and Ceridwen Hughes Uwchaled Award, which is announced each year at the Urdd Eisteddfod and given to people who make a significant contribution to young people in Wales.”

As a Welsh speaker, Len coordinates and promotes the weekly Addoliad Service, which is increasingly popular with both Welsh speakers and learners. Len has been a church warden for more than seven years.  As part of that role, he manages the six-acre churchyard.  The Vicar of St Michael’s, the Revd Kate Johnson said: “I am over the moon that Len was nominated for this medal.  Both he and Eirlys deserve to be recognised for their passion for the community of Abergele and especially among young people.  Len is very organised, has a great sense of humour and loves music!  I am very grateful for his friendship.”

Sunday 17th of January – THE SECOND SUNDAY of EPIPHANY

Sunday 24th of January – THE THIRD SUNDAY of EPIPHANY